You are here:
Translation Tools 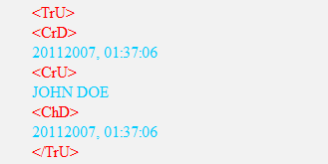 The Translation Unit (TU) is the main component of any translation memory. To see a TU firsthand any TM export will suffice (be it .txt or .tmx). Simply open the TM using a text editor (the best choice is Notepad as it consumes the least resources).

This is how a translation unit looks up close. I took the liberty of coloring some parts just for explanatory purposes. The red parts are in fact strips of code which declare where the TU starts (<TrU>), where it ends (</TrU>), when it was created (<CrD>) or changed (<ChD>), who created it (<CrU>), source and target languages (<Seg L=EN-US>, <Seg L=DA> ) and most important the equivalence between the segments of text.

The TU in .tmx format is quite similar

I bet you’ll say, wait there is a part in the beginning of the export with a lot of font names and other things. Well that is a sort of a “font cache” as Trados remembers style as well as content. You can ignore that as you may not find it useful in solving common issues.

Now that we got an Idea on how a TU is structured we can try and see some common issues we can address.

This is a very common case when clients don’t know, for example, that the official Norwegian is Norwegian Bokmal, and they create a TM using Norwegian Nyorsk. This can be very quickly fixed by using a simple “Replace” command in Notepad.

In Notepad go to Edit – Replace (or use the shortcut CTRL+H). For example, let’s say we want to change the source language in our TU from US English to UK English. All we need to do is replace the initials EN-US with EN-UK in the entire TM.
You might wonder how you can find out the initials that Trados uses for the languages you want to replace. Well create a new TM with the language combination you want to use and then just translate one sentence to add it to the TM. After you export the TM, open it in Notepad and see what the language initials are used.

Another highly useful feature you can unlock by using notepad and having a bit of TU knowledge is the X-Translate feature available when using Tag Editor.
The Pre-translated Unit or Perfect Match (XU) is in fact a translation unit which has been reviewed and is considered to be fully correct, and should not be edited under any circumstance. Let’s say our client has a big file that he frequently updates.
How do we skip all those Translation units and just concentrate on the ones we need translated.

1. Create a .ttx file out of the source untranslated file.
2. Use the Translate feature to translate all the 100% matches from the TTX.
3. Open the TTX with a Text editor (Notepad)

All we need to do is to use the replace function again.

Now if you open the bilingual (.ttx) file, the 100% matches should be locked and unavailable for editing (if not please refer to the article Tag Editor 101 – PROTECTION).

Stay tuned for more similar tricks that you can perform with translation units.

Why Desktop Publishing Is Important For Translations
June 12, 2017

Which translation tools are the best these days
November 5, 2016

4 steps to prepare for document translation which could cut down costs
October 17, 2016